Today we have an application for all those basketball fans out there, especially ones who like to follow the NCAA Women’s Basketball Tournament, and Pocket Bracket iOS app for Women’s College Basketball is the only application of its kind available to users.

The application is brought to you by Pure Concepts, LLC and the March Madness app offers users many features and is available for owners of the iPhone, iPad, and iPod Touch. There is also a version available for the Android platform, and the PocketBracket is the only app to offer both the men’s and women’s tournaments.

Users who download the application can create unlimited NCAA Basketball Tournament brackets, organize pools, and follow games during March Madness directly from their mobile device. As soon as the tournament gets underway brackets are automatically scored, and any users on either platform can join your PocketBracket pool.

This application will take all the hassle away from the user in managing their NCAA Tournament brackets, and they are easily completed using the simple to use touch interface. A SmartPick feature allows users teams to be automatically advanced, scored, and updated after each game. Other features include detailed stat screens, game scores and updates, create private pools, and rotate for a full Bracket view.

You can send out invites to people to join your pool from within the app via email, Facebook, and Twitter with one simple tap of the screen. PocketBracket: Women’s College Basketball 1.0 is available on the App Store for only Â£0.69/$0.99. iOS 4.0 or later required. 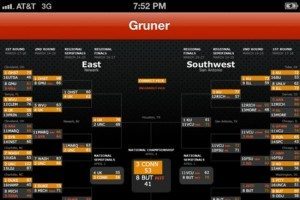