There will be many of you out there who are just about to start sniffing, sneezing and being inflicted with watery eyes because of hay fever and allergies. It’s that time of year when the pollen count becomes important to those who suffer and we’ve rounded up the top 5 pollen count apps on iOS and Android.

The first we’re looking at is a free iOS app called Pollen Forecast UK and this comes from Clarityn and uses the pollen forecast from the Met Office. This uses the camera on your iPhone and GPS to show the pollen count in your area in animated 3D form. It shows the count for that day and the next day and also has tips on how to cope with allergies. The app gives national and local pollen counts as well as a weather forecast and a new addition is that it now gives details of mould spores for the winter time.

Pollen Forecast UK from Clarityn is also available on Android here and again is a free app although it doesn’t appear from the description that this also gives mould spore information in winter as the iOS app does. This app requires Android 1.5 or later.

Another excellent app is Pollenalarm from Meda Pharma. This is suitable for Android devices using 1.6 or later and again it’s another free app. It gives those suffering from hay fever a pollen count that is personal to them using cities and zip codes, that is updated daily and customized. It takes into account 14 different types of pollen and includes a pollen dictionary.

Apart from these serious apps you may also enjoy a more lighthearted game based around pollen counts and an iOS game from Chillingo, simply called Pollen Count may entertain you. This is priced at $0.99 and the game involves collecting pollen from flowers and dodging other bees, birds, spiders and Zombees. It’s for iPhone, iPod touch and iPad using iOS 3.2 or later..

If you want Pollen Count HD suitable for iPads running iOS 3.2 or later, this app will cost you $1.99, but remember this version is just for iPads. There are various game modes and environments so you could end up whiling away many hours playing this game. You never know it might even end up taking your mind off your symptoms.

Hopefully at least one of these suggestions will be exactly what you’re looking for but if you can recommend another suitable pollen count app then let us know in the comments box. If you have already tried one of the above apps tell us what you think of it? 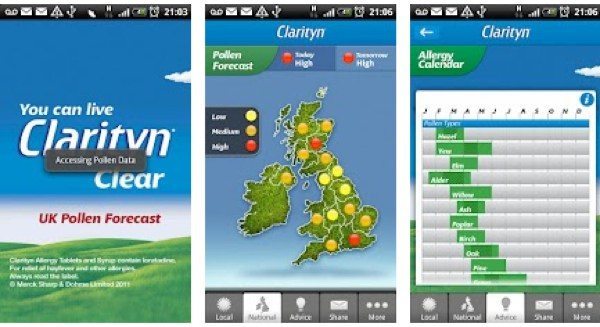 3 thoughts on “Top 5 pollen count apps for your allergy”