For those that adore getting their green pig bashing action on, you’ll know that Rovio is releasing a new version of their highly popular multi-platform game Angry Birds, where this time round those Angry Birds boldly go where no Angry Bird has gone before with the Angry Birds Space game.

With Angry Birds Space for iOS and Android you can now pursue those egg stealing green pigs across the galaxy over sixty interstellar levels in zero gravity situations, and the maker says the user will be able to make trick shots using differing gravity pulls.

I’m sure the most avid of Angry Birds players have already seen the promo videos showing how its all done, and Angry Birds Space looks to be fairly harder than previous versions, but no doubt once you get the hang of it all you’ll be battling the pigs with ease.

Of course with the new Angry Birds Space game there comes new birds with new powers, detailed backgrounds, and hidden bonus levels and no doubt Angry Birds Space will be just as successful as previous versions of the game.

So there you have it, Angry Birds Space is now available to download to your chosen device so you can get your pig bashing outer space action on…enjoy. 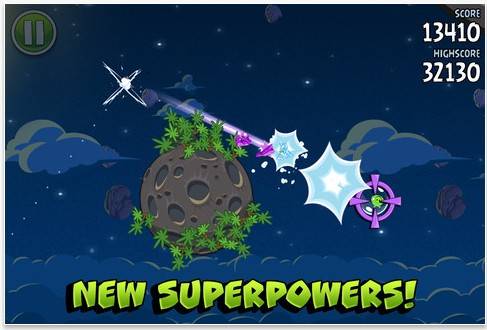