Are you an Android gamer that would like the ability to record and share hero moments of your game playing with the gaming world? If so that just might happen in the not too distant future as LunarG have now developed an SDK to allow Android developers to add features to their games that will enable players to share those in-game moments simply by installing the free SDK and without the need to root.

According to the guys over at Droid Gamers, SeeMeGaming SDK will allow gamers to record their gameplay and once they have recorded a clip they can upload to YouTube and share to such places as Facebook and other social networking websites straight from your Android smartphone or tablet.

The SeeMeGaming SDK is free for developers and features OpenGL capture rather than video frame capture, which results in a very low overhead, enabled in the background from the start of the game, the gamer doesn’t need to anticipate when interesting moments will arrive, once a gamer hits a button , SeeMeGaming takes a step back and saves the last 30/60/90 seconds to a file which gamers can replay later on their device and then share via a single click.

If you are interested in giving SeeMeGaming a whirl you can download the free SDK from LunarG, and just so you can check out what SeeMeGaming is all about before doing so, we have a SeeMeGaming intro video below for your viewing consideration, so mash that play button and have a gander…enjoy. 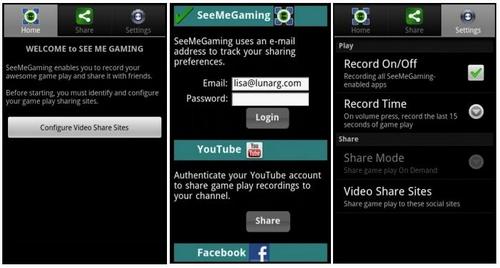