All Sprint and AT&T smartphones outsold by iPhone

Considering the size of the Apple following over in the good old US of A, it is hardly surprising that the iPhone is doing rather well when it comes to sales on three of the four major US carriers. Headed by the iPhone 4S, Apple’s iOS smartphones continue to generate strong sales on Verizon, AT&T and Sprint, with some believing that the iPhone is probably the top selling handset on all three.

According to an article over on AllThingsD, Mike Walkley, an analyst for Canaccord Genuity has said that they believe that the iPhone is outselling all combined smartphones at both AT&T and Sprint, and approximately the same volume equal to all Android handsets at the Big Red.

Walkley went on to say that according to their global checks, Samsung garnered strong market share gains for the period, especially in Asia and Europe, and they believe that Samsung’s smartphone shipments will increase 15 percent plus sequentially during the seasonal weak March quarter due to Samsung’s strong smartphone portfolio across all price tiers.

So there you go, the iPhone is still the top selling smartphone in the USA on three top carriers; however I am sure that Android is quite capable of holding their own in the smartphone space and no doubt those figures could change somewhat once Samsung delivers the Samsung Galaxy S3. 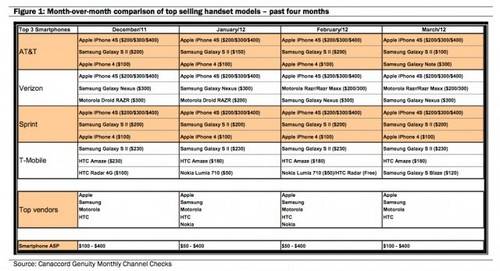