The latest smartphone out of the Nokia camp is of course the Nokia Lumia 900 that is due to become available over in the good old US of A on AT&T as of the 8th of this month. But how does the Lumia hardware stack up against the likes of the iPhone 4S or the Samsung Galaxy Nexus? Well let’s find out with a Nokia Lumia 900 teardown video.

So what we have for your viewing consideration below is a video of the Nokia Lumia 900 being cracked open to let you know just what is lurking inside the new Nokia Windows Phone.

The video footage comes our way courtesy of the guys over at Tech Republic, and delivers five and a half minuted of digging inside the Nokia Lumia 900 smartphone, which reveals the device sports a single core 1.4GHz Snapdragon S2 processor, and 16Gb of storage whereas rivals the iPhone 4S has the dual core A5 processor and 16GB, 32GB, 64GB storage, whilst the Samsung Galaxy Nexus has a 1.2Ghz dual core processor and 32GB of storage.

When it comes to battery life, the Nokia Lumia 900 again doesn’t fair too well as apparently the Lumia delivers up to 7 hours, whilst the iPhone 4S offers 8 hours and the Galaxy Nexus is said to offer up to 12 hours.

However, although the Nokia Lumia 900 is bested by the iPhone 4S and Samsung Galaxy Nexus, the guys do say that the Lumia 900 is the best Windows Phone they have tested and overall performance matches the two rival smartphones.

Anyway enough of me, I’ll leave it right there so you can skip on down to hit that play button and check out the Nokia Lumia 900 being cracked open on video…enjoy. 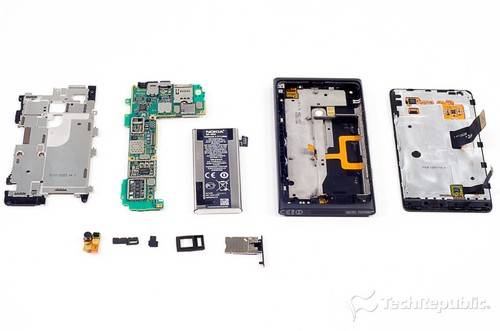