I’m pretty sure that most are aware that texting when driving is a very dangerous issue on the roads, and a new study reveals that 33 percent of drivers in the United Kingdom admit to reading text on their smartphone whilst in control of a vehicle. The study was commissioned by Ford in conjunction with the launch of their SYNC in-car connectivity system that uses text to speech to read out load incoming text messages.

The Ford SYNC technology including text to speech makes it’s debut this year in the new Ford B-MAX car and will also be found in following models including the Ford Focus and Ford Kuga, and the tech allows drivers to listen to incoming text messages and answer via voice from a predetermined list of replies.

According to the study, 95 percent of drives concur that texting when at the wheel affected a drivers ability and safety, whilst half of those surveyed said that they believe when checking a text message when driving a drivers response was 50 percent slower.

The text to speech feature of SYNC is powered by Microsoft, and retrieves messages by way of using a simple voice command via Bluetooth enabled smartphones, and enables the driver to respond for a predetermined list with such replies as ‘see you in 10 minutes.”

The chief engineer of electronic and electric systems engineering for Ford Europe, Christof Kellerwessel, says that text messages can be a distraction to drivers and the benefit of a system that can read aloud messages from compatible smartphones is obvious.

Personally I believe that using your mobile phone whilst at the wheel is totally inconsiderate to other road users, as more often than not if you have a crash because you where concentrating on your phone rather than the road, that crash will involved another vehicle or pedestrian. So basically drivers should use a hands free solution if they simply can’t do without using their device…agree or disagree? 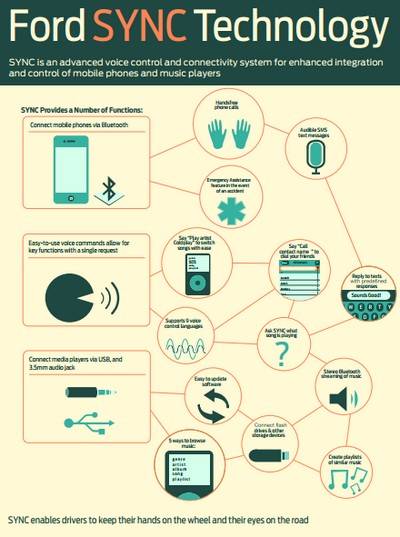