Top 6 must have Titanic apps

We are only a few days away now from the 100th anniversary of the sinking of the Titanic where over 1500 people tragically lost their lives. Today we are looking at the top 6 applications about the famous ocean liner for both the Android and iOS platforms.

First up for owners of the iPad we have Titanic by King’s Apps that promises to be a trivia app like no other. Users won’t have to play the application by themselves as it has been designed to be played by multiple people. There are 120 questions that relate to Titanic with more questions to be added in future updates. The app also features music and sound effects and will support the new iPad’s Retina Display. The app is available on the App Store for only Â£0.69.

Next we have Sinking of the Titanic for Android users, which is a collection of first hand stories of the liners maiden voyage along with accounts of other sea disasters. It features stories from survivors that were told after the famous ship had sunk and is available free via Google Play.

Another Android application we have for you is Titanic Searcher, which helps users to collect information about Titanic. It features a professional image search browser that has been optimized for collecting images of Titanic along with news. To find out more and to download this free app head over to Google Play.

RMS Titanic Tour in Southampton is an iOS application that is an audio tour taking users around the city of Southampton where Titanic set sail on her maiden voyage on April 10th 1912. The app will reveal all the key Titanic locations telling the full tragic story along the way. Head over to the App Store to download the app that is available for Â£1.99.

Titanic: Her Journey is another application for owners of the iPad that covers the liner from her construction in the docks of Belfast to the stories on board during her tragic maiden voyage. Users will find detailed deck plans that can be expanded and explored along with rare archive footage of the ship. Other information includes a sinking timeline, narrated survivor accounts, colour images of the liner now, and much more. This is available on the App Store for Â£2.99.

Finally for Android users we have Sinking of the Titanic and Great Sea Disasters, which is a full length digitised eBook version of a classic book about the disaster. Once downloaded the app can be simply read with pages being turned by using the phone’s volume keys, and if you close the app the book will reopen at the place it was last read. This is available on Google Play for only Â£0.59. 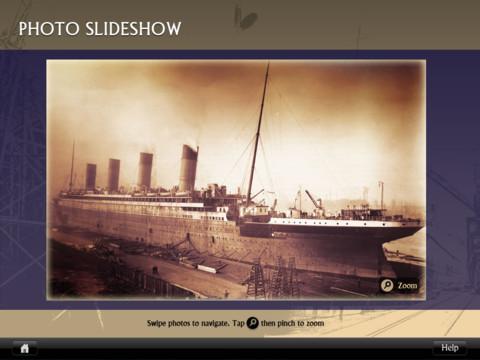