The need for Tweegram for Android

One such mobile app that has been available on the iOS platform via iTunes for quite a while is Tweegram, a mobile application that allows the user to write their thoughts into their social timeline, sharing those thoughts with such places as Instagram, Twitter, Facebook, Tumblr and so on.

With the Tweegram app for the iPhone, iPod Touch and Apple iPad, if you wish to share your thoughts with your social network all you need to do is write that thought, then choose a template and share it, and the message is generated as an image that the user can share directly with their timeline.

Now no doubt sooner or later the Tweegram app will eventually come to the Android platform, and apparently the Android app will include in-app purchases along with new styles and with no character limits so you can really express your thoughts to your social friends. 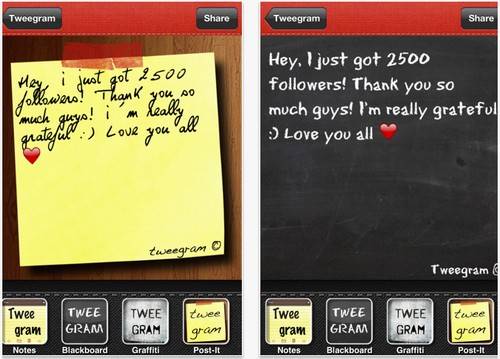 2 thoughts on “The need for Tweegram for Android”