The Huawei Ascend G 300 handset offers the user a 4-inch WVGA capacitive touch screen along with a 5 megapixel auto-focus camera with LED flash, 2GB built in storage, microSD expansion up to 32GB, WiFi, Bluetooth, 1500mAh battery and runs Android 2.3 Gingerbread OS, although it is not known whether the Huawei Ascend G 300 will see an update to Android Ice Cream Sandwich at some point in the future.

Of course as the Huawei Ascend G 300 is an Android device it does give access to the abundance of mobile applications available from Google Play, and the device measures 122.5 x 63 x 10.5mm with a weight of 140 grams.

Currently there is no word on just when Vodafone will make the Huawei Ascend G 300 available to purchase, and there’s still no word on what the Android handset will cost, but for those that are interested in the new device, you can register your interest by hitting up the Vodafone UK website to receive updates on the handset.

And that’s about your lot, not much more to say about the Ascend G 300, other that asking if any of our UK readers out there are contemplating picking up the Gingerbread handset once it becomes available. 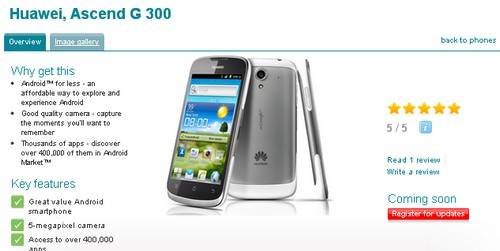