Pledge & back Pebble watch for iPhone and Android: Update

Here at Phones Review we don’t just like to keep readers informed about the latest new smartphones and tablets but also like to let readers know about products that may come to fruition. We’ve posted articles about Kickstarter projects before and today wanted to tell you about a Pebble watch for iPhone and Android.

Kickstarter is a great platform for people to pitch their plans for a possible future product and try to gather the necessary funding to turn the idea into a firm product. When an idea is pitched then there is a limited time allowed to raise a target amount of funding and we’ve seen some great products gather the necessary funding such as Zooka, an iPad speaker dock and Miveu-X, an iPhone photography mount. This time the project is the Pebble: E-Paper Watch for iPhone and Android.

The Pebble watch utilizes the latest cutting-edge technology and can be customized through the use of downloadable e-paper watchfaces and also internet-connected apps. You can choose for example between a traditional dial watchface, a digital display or a diplay that just tells the time in words and you can change these daily if you want to using the Pebble iPhone or Android app. It can work with either iPhones or Android smartphones and connects via Bluetooth with incoming calls, alerts, Facebook and Twitter messages, emails and more setting off a silent vibration although you can turn this facility off if you wish to. You can also dimiss notifications though by merely shaking your wrist.

This is a very cool device and some of the very first Pebble apps will be one that allows cyclists to to use the Pebble as a bike computer and another that will enable running data to be shown on the Pebble along with a music and golf app to take full advantage of the Pebble. The Pebble is compatible with the iPhone 3GS, 4, or 4S running iOS 5.0 or later and also the iPod touch running iOS 5.0. It is also suitable for Android devices running 2.3 Gingerbread or later. It can be set up simply by using the Pebble app and all software updates are sent straight to your Pebble wirelessly.

Color options so far are red, white or black and the Pebble includes a textured plastic case, shatter-resistant lens with anti-reflective coating and 22mm rubber strap along with a USB cable for charging. There’s an Early Bird offer at $99 and different pricing options for different packages, which you can see at the Kickstarter link here along with a useful FAQ section. Funding pledges really took off for the Pebble and it has already reached the required target of $100,000 and in fact has raised $736,295 as I speak from 5,454 backers. This looks set to be a huge success then and we can see why as it seems a really great idea and product.

You can see a video all about Pebble below this story. Are you interested in the Pebble for iPhone or Android? Maybe you’re one of those who have already backed the project on Kickstarter? Let us know with your comments using the box below. 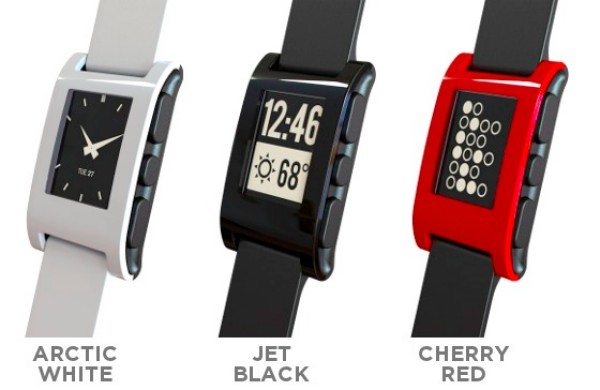 One thought on “Pledge & back Pebble watch for iPhone and Android: Update”