If you are an iOS gamer into the action fantasy game Infinity Blade 2, you just might like to know that Epic Games have added a new community feature to the game, Infinity Blade II: ClashMob that enables gamers to earn rewards for working with other gamers on group challenges, and has all gamers working together towards a common goal.

According to the guys over at Wired, the ClashMob feature is a free update to Infinity Blade 2 owners, basically imagine you have a monster worth a million points, the gamer gets 30-seconds to hack and slash the monster to knock off as many of those one million points as possible.

Once your 30-seconds has ended you can then watch the rest of the community attack the monster, and if enough of your group attacks the monster it dies and you receive a reward such as a sword.

The guys say that ClashMob is almost an MMO type experience, but due to the way iOS hooks into the cloud, the gameplay can be asynchronous, meaning you can take your turn at your own pace, whether a single turn a minute, an hour or a day it’s up to you.

Apparently there is also another new feature to Infinity Blade 2 called MyMob, a feature that enabled the gamer to bring in allies on Game Centre and Facebook to help you in the community challenge, and when you invite friends to join your mob or help for ClashMob on Twitter or Facebook, retweets and likes apparently are counted toward completing the challenge.

The update to Infinity Blade 2 was on Wednesday, whilst the first 5 ClashMobs went live the day after, and for those iOS faithful gamers that haven’t yet downloaded Infinity Blade II, you can grab the app from iTunes at a cost of $4.99. 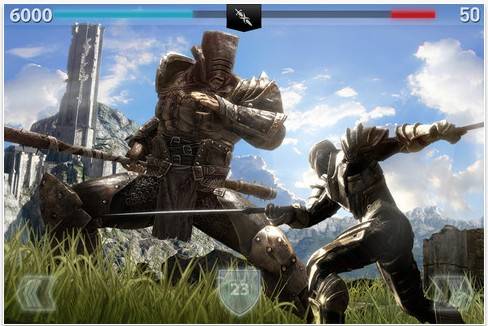