Well now it would appear that the Motorola Droid RAZR HD smartphone, which has been a device exclusive to China thus far, just might be making its way out of China and possibly heading to other countries such as the United States and possibly on Verizon Wireless for those that might be interested.

According to the guys over at GSMArena, a picture of the Motorola RAZR HD has been found on the Picasa page of Motorola Mobility program manager and engineer, Vic Yu, and the name of the device was located in the EXIF data for the image.

Apparently the EXIF data comes from a six megapixel shot of the device, but in 16:9 aspect ratio, thus means at 4:3 the picture resolution would be 8 megapixel.

As this particular Motorola Droid RAZR sports HD it should mean the device sports a 720p touch screen, something that according to the guys isn’t unheard of because they have seen a Motorola RAZR variant being offered in China sporting a 720p display along with a 13 megapixel camera. 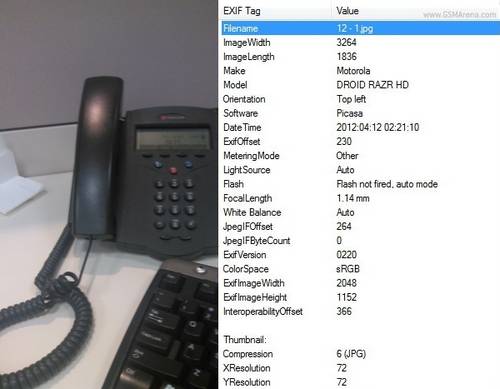