As well as bringing news about various smartphones we also like to keep readers informed about really useful apps and today we have news of an iPhone app allowing the user to compare carriers and track the best offers. CarrierCompare — Find the best service for you is a free app and suitable for iPhone 3GS, 4 and 4S, iPod touch (3rd and 4th generation) and iPad.

The iOS app, requiring iOS 5.0 or later, was developed by SwayMarkets Inc. and will help you find the best carrier for your needs in your location in the U.S. so it strikes us that some carriers may not be too pleased about this useful app! The app analyzes your network once you touch the start screen and in around 15 seconds weighs up speed, response time and signal strength of your device. It then compares those details with those of the other two national carriers for your location and places your carrier among the rankings, helping you to make the decision of whether to stick with your carrier or jump ship to another.

CarrierCompare was brought to our attention by News4Jax which points out that carriers have managed to keep such information away from public eyes up until now, although the carriers are always stringently testing their own networks and the competition. Thus an app that gives customers the precise information they need may well have Verizon, AT&T and Sprint a little concerned. However it is crowd-sourced so best results will come when many people have adopted its use.

Further developments for the app will come into play for the second version and an Android version is also planned but for now the CarrierCompare app is for iOS devices and you can find the iTunes download link here. We’d like to hear what you think about this app or if you have already used it successfully? Do you think any of the major carriers should be worried? Let us have your comments on this. 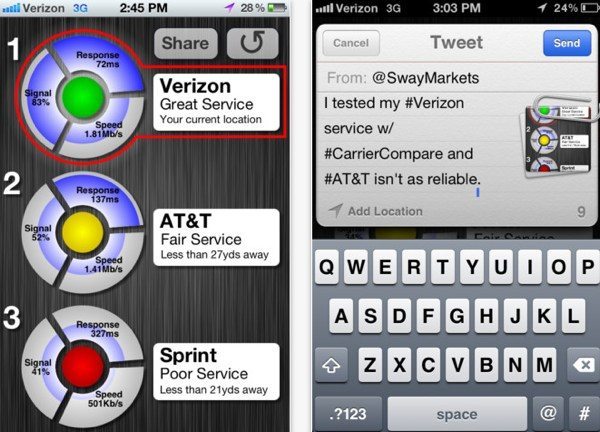