The iOS vs. Android debate is seemingly never-ending and so too it seems is the impact of both platforms on the smartphone market. In fact these two operating systems and the devices they are used on are further penetrating the smartphone market at the expense of all-comers according to new data.

Apple iOS devices are now catching Google Android devices in numbers activated but the important factor to consider from this is that the iOS rise is not detrimentally impacting the Android share but just taking customers away from the other remaining platforms such as RIM’s BlackBerry, Windows Phone and Symbian. Things are looking pretty dire then for non-iOS or non-Android smartphones.

The figures are interesting when compared to the overall data for ‘all smartphone owners’ where Android account for 48%, iOS 32%, RIM 12% and ‘others’ 8%, showing the vastly increased penetration of the iOS platform over the last three months, the steady popularity of Android devices and the drop for other platforms of 11% combined.

When looking at the smartphone market as opposed to the whole mobile market, smartphone owners accounted for 49.7 of mobile subscribers, up from 38% one year ago. More than two thirds of consumers who made a purchase in the mobile market over the three months to the end of February, bought a smartphone rather than any other mobile device.

What are your thoughts on these latest smartphone market figures? Are you surprised at the increasing numbers of iOS device buyers? Maybe you think it’s the end of the road for all of the other platforms except iOS and Android? 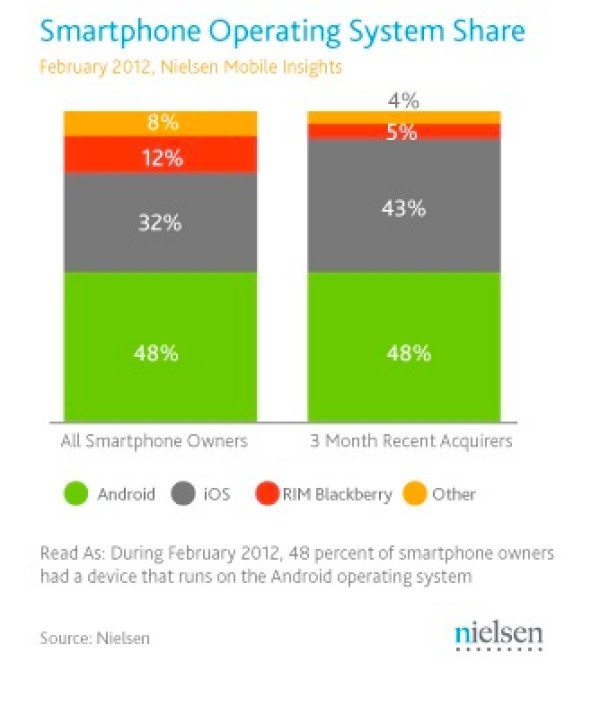