Great news today for enthusiasts of Meizu’s MX smartphone as the quad-core variant is now on its way. The Meizu MX Quad-core is a stylish looking handset with a very decent set of specs and features and we can now tell you a release date and price along with much more detail.

The Meizu MX Quad-core follows on from the dual-core MX, Meizu’s flagship device and there should be a huge amount of demand for this already popular phone in quad-core form. At the heart of this smartphone is a quad-core Samsung Exynos chip (Cortex-A9-based, 32nm HKMG). A quad-core Exynos chip is also being widely rumored for Samsung’s flagship device, the Galaxy S3, so it will be interesting to see which one comes first to the table.

The clock speed of the processor or RAM is not yet known but Engadget feels it’s likely that the MX Quad-core will feature the Exynos 4412 1.5GHz processor. Power users will be pleased to hear Meizu’s claims that 20% of CPU power consumption can be saved when compared to the dual-core MX and the battery has also been stepped up to 1,700mAh from 1,600mAh. It will run on a Meizu-customized Android 4.0 Ice Cream Sandwich OS, also known as Flyme.

Other specs and features include a 4-inch ASV display with resolution of 960×640 (292ppi) and an 8-megapixel BSI rear camera. More good news for those who are concerned at the lack of microSD expansion is that the MX Quad-core starts with 32GB of internal storage for the same price as the 16GB MX original. The release will be in June and as well as the white MX Quad-Core, five more back cover colors will also be available.

This report tells how there are no plans yet for a launch of the Meizu MX Quad-core to launch outside China and Hong Kong but we think quite a lot of people internationally would like to be able to get their hands on this quad-core beauty so it will be interesting to see how this develops. Do you like the look of the Meizu MX Quad-core? If you’re not in China or Hong Kong would you like to see a release in your region too? 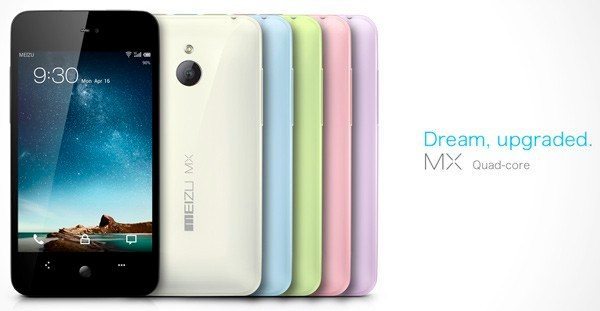