For those gamers on the Windows Phone platform that are already playing Wordament, the word is you will soon be able to grab an updated version of Wordament from the Windows Phone Marketplace that will have Xbox Live intergreated into the mobile application.

According to the guys over on WMPoweruser, the Xbox Live version of Wordament for Windows Phone will arrive on the Windows Phone Marketplace as of the 25th of this month and will be a free release that will replace the Wordament game you are currently using.

Furthermore, Wordament.com have also announced that they will be hosting a Wordament Tournament along with an open house at Microsoft’s store in the Bellevue Square Mall, Bellevue, MA.

Apparently the update to Wordament for Windows Phone delivers several top-player requested and fun features, with the most notable being they are dropping their on-screen name and are moving exclusively to Xbox Live Gamertags due to Xbox Live having a good identity system and Wordament works well with it.

Thus as of the 25th of this month, when a gamer signs into Wordament it will only user the gamer’s Xbox Live Gamertag, which mean you will be required to get a free Xbox Live account for your Windows Phone handset if you haven’t already got one.

They will also roll out on launch a new feature called Language Editions, with each edition offering language specific puzzles, and will be releasing the new English Edition and opening the Spanish Edition Beta on the 25th of April, with each edition having its own leaderboards and statistics including top and best players. 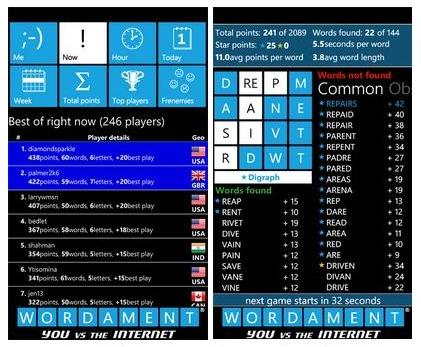