With the lead up to any new smartphone we get to hear about a number of different rumours and speculation regarding what the device may bring, which is often coupled with some supposed images of the new device, and now images of the iPhone 5 have emerged that comes in the Windows Phone flavour.

The image what you can see above is obviously not the actual handset due to be released by Apple, but instead some tasty looking ice cream that as Know Your Mobile are reporting is in a nice mango flavour. The desert even comes shaped like the Apple logo, and the manufacturer of the ice cream must have done it to annoy Microsoft by making it mango flavoured.

Apple won’t be able to get their already busy lawyers on the case as the company hasn’t trademarked the iPhone 5 across a variety of industries, but hopefully they have a sense of humour and can see the funny side of the icy treat on offer. The packaging even has the iPhone 5 trademark in English plus a number of recognisable icons that includes one for Angry Birds.

Maybe Apple could purchase some for their workers in the Chinese factories busy producing the next iPhone once production gets under way. Do you think Apple will see the funny side of the ice cream packaging? 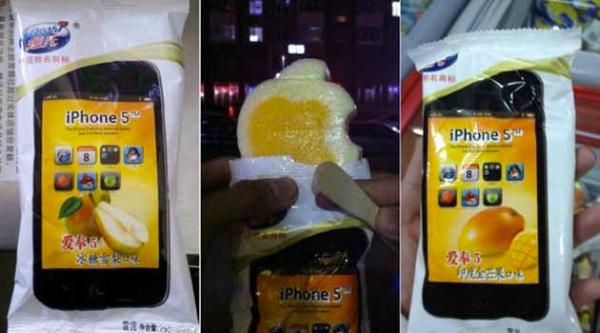