Earlier today we gave readers the news that an intriguing Samsung webpage with a live countdown was teasing the arrival of the next Galaxy device. As the hours counted down many were enthralled and at the time the countdown reached zero demands on the site were so great that it took some time for all to become clear. Finally we can tell you that the hyped Samsung Galaxy phone teaser has unveiled two videos that have now gone live.

The teaser before the countdown ran out told us that something would be revealed about the Next Galaxy and the domain page was an anagram of ‘the next Galaxy.’ When the clock finally counted down and the page finally stopped crashing another riddle asked us to click on the letters in the right order for the next step. A message then popped up saying “Looks like we’ve got a live one here! Go on, you’ve earned it” with a prompt to click the end of the message. At last we’ve been able to ascertain what that link takes you to and it is teaser videos of the Samsung Unpacked event coming up in May.

We have already informed readers of a Samsung event in London on May 3 which teased us with ‘the next Galaxy S’ and of course most of us have assumed that will be the Galaxy S3. Today, after hours of countless fun (!) and hopes of a sneaky look at an image or video of the Galaxy S3 (S III) these teaser videos aren’t quite what we’d hoped for and we imagine that many people keenly glued to the countdown were also hoping for something Galaxy S3-related too. The videos, as Engadget points out, really don’t reveal much about the ‘next Galaxy’ other than it becoming a ‘natural part of life’ with lots of astronomy images.

We’ve embedded one of the videos below this story so you can take look and be as equally teased as we were and you can see the other video here. What do you think of the way Samsung is building up the hype for the ‘next Galaxy’ phone? Is there a risk they could overdo it by not letting out enough of what we really want to see? Do you hope all this hype is for a reveal next week of the Galaxy S3? Let us know with your comments. 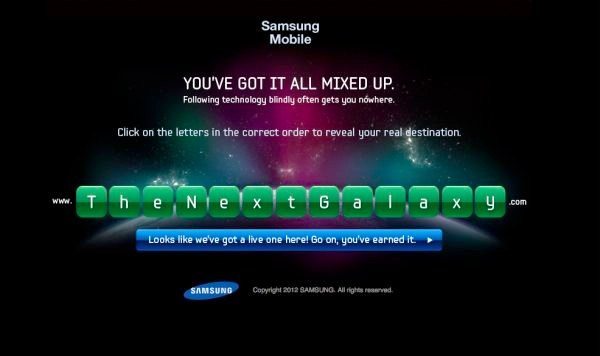