There has been a huge amount of excitement in the mobile world over the last few days with the mounting hype for the Samsung Galaxy S3 (or S III). Expectations that it will be unveiled at a Samsung Unpacked event next week were rife and now that anticipation has been proved correct with news of an official Samsung Unpacked app for 2012 that actually specifies the Galaxy S3.

Yesterday we, along with many others, got caught up in the Samsung teaser of a live countdown that promised some new info at the end of it about the ‘next Galaxy’ but still didn’t specify it was actually for the Galaxy S3. There was a certain amount of disappointment when after a certain amount of puzzlement some official trailers for the event that didn’t show much at all were finally revealed.

Now though, instead of us all speculating that the Galaxy S3 that so many people are waiting for will be unveiled, Samsung has stopped the teasing and issued an Android app, as brought to our attention by Engadget. After all the rumors and conjecture about this much-awaited smartphone, it seems that we will finally find out all the official details at the event in London on May 3. This is the first time we’ve seen Samsung actually use the name ‘Galaxy S3’ itself and the new app will allow users to watch a live stream of the Unpacked event allowing many to see the big reveal at the same time as journalists invited to the event.

We imagine that the app will be incredibly popular and to add to your build-up the sooner you download it the quicker you can start to hear all the news. It’s called Samsung mobile UNPACKED 2012 and is available at this Google Play link. It’s a free app suitable for devices running Android 2.2 or later and you’ll see that the first line of wording under the description includes ‘samsung mobile UNPACKED galaxy s3.’

The app will enable users to follow new product launches, includes an event schedule and also has event location and transportation details for those lucky enough to attend in person. Users will also be able to view press releases, get detailed info about new launches and course access UNPACKED Live, which they will also be able to replay after the event. Knowing how massive the anticipation is for the Galaxy S3 we reckon this app is going to be a smash hit and many readers will love the chance to be able to follow the unveiling of the Galaxy S3 as it happens.

Are you waiting for the Galaxy S3 to be revealed at last? What for you are the key features that you’re waiting to see on this flagship Samsung device? Let us know with your comments. 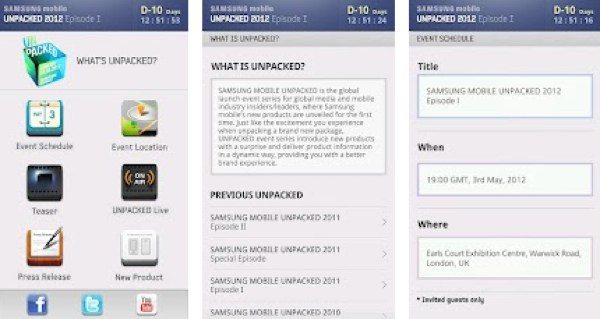