Last month we told you about the upcoming Spotify for Android update and how to get an early preview of the application, and it seems the Spotify team have been busy with the launch of a new dedicated Spotify app for the Apple iPad.

There have been months of speculation that an iPad specific application was in the works, and now as TechRadar are reporting it has finally arrived. The new application will be landing on the App Store today and will bring with it Retina Display support for the new iPad, and a swipe-tastic user interface that will work on all the versions of the Apple tablet PC.

Spotify describes the iPad version of the app as focusing on discoverability compared to the iPhone version that focuses on playing what has already been discovered. The iPad specific version of the app has a similarity to the recently announced Android beta app, and comes with a slick interface that makes use of the bigger screen to show album art and allows a quick swipe to skip tracks, and there is also panelled navigation.

If you want to stream music via the application you will have to be a premium subscriber, but free users will still be able to download and log-in to see all the new features. Just like the desktop version of Spotify you get features such as playlist, view, recommendations, folders, inbox, and the ability to look at friend’s profiles, but it doesn’t feature the Spotify apps such as last.fm and We Are Hunted.

These could be on their way though in future updates to the app as Spotify’s Gustav SÃ¶derstrÃ¶m said when asked about the apps that “We’re always working on lots of stuff, listening to users seeing what they like and developing for that. So we’ll let you know”. For the first time the app comes with the optional crossfade and gapless playback, which will be welcomed by some. The Spotify iPad app will land on the App Store at some point today as a free download.

Are you pleased to hear about a dedicated Spotify iPad app? 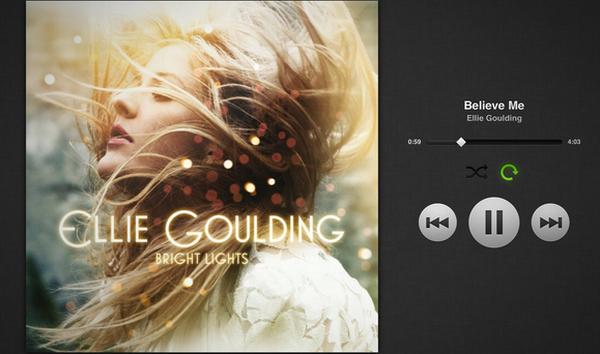