If you are over in the USA and have a preference for the T-Mobile network, and are in the market for a new affordable entry-level Android smartphone, you might like to consider the new Huawei built T-Mobile Prism 3G, an Android device that has been designed basically for first time smartphone users.

According to the guys over at Tmonews, the word is that T-Mobile is to launch the T-Mobile Prism 3G on the 6th of this month, which is of course this coming Sunday via Best Buy and via Walmart as of the 9th of May, and all other sales channels as of the 23rd of the month.

The T-Mobile Prism comes running the Android 2.3 Gingerbread operating system but it is doubtful that this particular device will see an update to Android Ice Cream Sandwich, but who knows, it might happened sometime down the road.

Thus for those that fancy owning an introductory Android handset, perhaps the T-Mobile Prism 3G is the device for you, as for what the T-Mobile Prism 3G will set you back, there’s no word on that just yet, but rumour has it the device, which will be available in charcoal grey, grey clam or red will have a price tag of roughly 50-bucks on contract.

So, are any of our T-Mobile faithful readers out there really interested in picking up the T-Mobile Prism 3G? 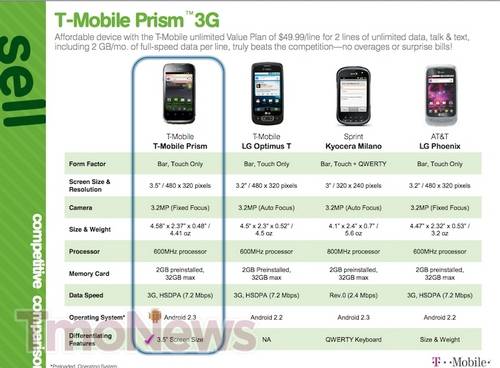