Many Android smartphone enthusiasts are now waiting avidly for the Samsung Mobile Unpacked Galaxy S3 event tomorrow, which takes place in London. The Galaxy S3 (aka the SGS3 or S III) is a highly anticipated handset and we know from comments to our previous posts about this phone that many of our readers will be waiting to hear all the news. With this in mind we invite you to follow us on Thursday May 3 for the Samsung SGS3 event.

The Galaxy S3 will be a flagship device for Samsung and is expected to be the focus of the event although it has been reported that other devices, such as the so-called GT-I9800, may also get a mention. The Samsung event begins at 7pm UK time and we have already posted an article giving world times and live streaming details so simply hit the link to find out what the time will be for wherever you are. We will be covering the whole event and giving news as it comes so if you check back with us you’ll find plenty of information about the Galaxy S3.

We’ve spoken recently about the mystery regarding US carriers this time around, seen many leaked images and also concept designs and have been reporting on rumored specs and features. Suggestions are that the Galaxy S3 will feature a quad-core Exynos processor, large Super AMOLED Plus HD display, improved 10 or 12-megapixel camera, possible LTE connectivity and much, much more so hopefully there’s not too much longer to wait until we can confirm these details.

There have also been some teaser videos about the event from Samsung and there’s also an Unpacked event Android app available. You may also be interested in our recent post about Apple’s WWDC 2012 vs. Samsung Event. As well as confirmation about specs and features for the Galaxy S3 we are hoping to hear news about release date and possibly pricing as are many of you.

It has previously been reported that Samsung hope for a simultaneous world launch for the Galaxy S3 to avoid the upset last year that occurred when some regions (such as the US) did not see the arrival of the Galaxy S2 for many months after it had been released in other countries. That is something that we feel is important to many of our readers so we hope to bring you more on that.

Join us at Phones Review then, tomorrow at 7pm UK time, to hear all the developments from the Samsung event as it happens. We’re interested to hear from you about your hopes for the Galaxy S3. Are you expecting a release soon? Are there any features or specs you hope for that are deal breakers as far as you’re concerned? Let us know by sending us your comments and remember to check back with us for all the news on the Galaxy S3. 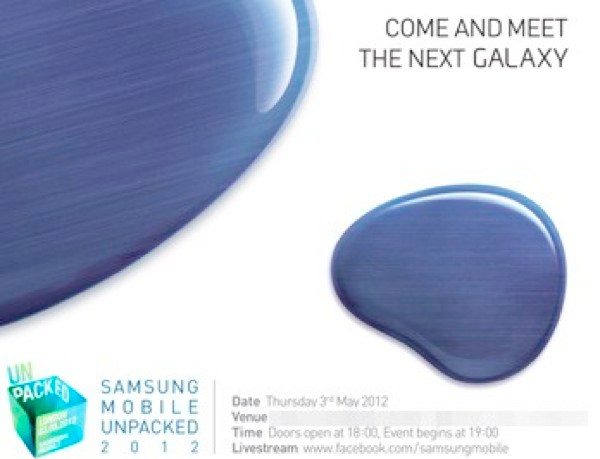