All the speculation and rumours leading up to the launch of the Galaxy S3 can only be rivalled by the iPhone, as we have seen many different claims and images emerging in recent weeks. Today we have some more images that are claimed to be of the Samsung Galaxy S3 GT-I9300, and another device labelled the GT-I9800 is said to be coming too.

The team over at SamMobile have another image of what is being claimed to be the Galaxy S3, and the device will have the model number GT-I9300 and will come running Android 4.0.4. It is also being reported that the Galaxy S III will be available sometime next week after tomorrow’s reveal.

It is not known if the device pictured is the final design or just a dummy, but it does look real and is already thinner than the Galaxy S2. The camera on the device is again being claimed to be a twelve megapixel unit, and it also seems to have a notification LED that could be for the battery.

Samsung could be about to reveal more than one handset tomorrow as a source is claiming that another model labelled GT-I9800 is set to arrive to. Visually the device looks similar to recent speculation with a screen size along the lines of the Galaxy Nexus, which features a 4.65-inch Super AMOLED display.

Meanwhile over at the Android Community there are some images of what is said to be a screen protector for the Galaxy S3. A South Korean manufacturer by the name of Colorant has released the product that was spotted by Unwired HK, and it can be seen placed on a number of different handsets.

The protector doesn’t fit the devices and is bigger than the original Galaxy S2 that has a 4.3-inch display, and even the 4.7-inch HTC One X is smaller. This could mean the recent rumours about a 4.8-inch screen size may be true, along with the claims of the device being longer with a lower home button.

Samsung will put an end to all this speculation tomorrow in London with its special event, and we have all the start times for around the world here. Is the Galaxy S3 a device you plan to purchase this year? 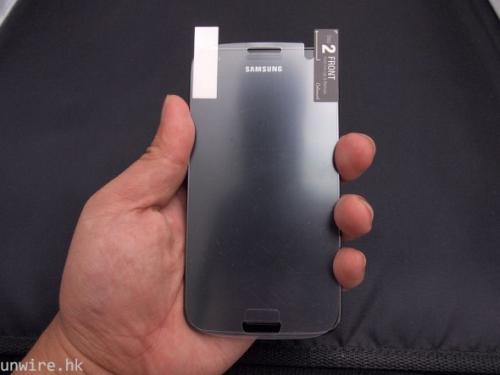