For all you fitness fanatics out there on the iOS and Android platforms that user the RunKeeper app for tracking and sharing your workout info, you could soon be receiving that RunKeeper info on your wrist thanks to RunKeeper partnering with Pebble Watch, a record-breaking Kickstarter project.

According to the guys over at Cult of Mac, RunKeeper has now announced that they will be the first 3rd-party service to partner the Pebble Watch, which features a customisable interface that connects with smartphones and applications such as Android devices and the iPhone.

The Pebble Watch Kickstarter project was looking for a funding goal of $100,000, but has thus far accumulated a staggering $8,211,694, yep that’s over 8 million bucks, and you can pre-order the Pebble Watch on Kickstarter, starting off at $115.

Apparently according to the RunKeeper Blog, Pebble Watch contacted them about integrating with RunKeeper, and the company loved the idea, and thus have announced that once the Pebble Watch becomes available they will be integrated with RunKeeper. Although it could take a couple of months before the watches are ready, but as soon as they are user’s will be able to view their in-activity fitness data and control RunKeeper from their wrist.

The Pebble Watch, as stated above can be pre-ordered from their Kickstarter page for 115-bucks for the US version, and international customers will of course have to pay a tad more for handling and shipping, whilst the Runkeeper app can be downloaded for iOS as a free download from iTunes and for Android as a free download from Google Play.

Will any of our iOS or Android readers out there be pre-ordering a Pebble Watch? 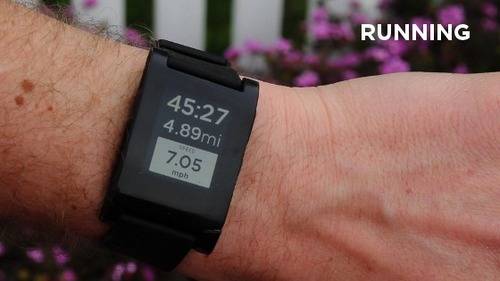