New claims made of iPhone 5 form factor and screen size

There have been a number of claims and rumours in recent weeks regarding what the next Apple iPhone will be like, which is believed to be launching later this year in the fall, and now new claims are being made of the iPhone 5 form factor and screen size.

Leading up to the launch of the new iPad iLounges Jeremy Horwitz made some claims about the device that some of which were then seen on the device when it launched in March, and now the same source is making new claims about the iPhone 5. It is being claimed that the next iPhone will be longer and thinner than the iPhone 4/4S with approximate measurements of 125mm x 58.5mm x 7.4mm.

This is a 10mm increase in height and a 2mm reduction in thickness with an almost identical width, and it is being claimed that Apple will use a metal panel for the rear casing that will be flat. The upcoming device is also claimed to be manufactured from Gorilla Glass 2, which can be made thinner than the original Gorilla Glass but with almost the same strength, or at the same thickness with much greater strength.

The change in height is to accommodate a slightly larger display that will measure roughly 4-inches corner to corner, and as the device will be the same width it seems Apple is going to change the iPhones aspect ratio for the first time since the device was first introduced in 2007. This will add additional pixels to the top and bottom of the display, and is similar to what happened between the fourth and fifth generations of iPod nano, and is not the first time a 4-inch screen has been mentioned for the next iPhone.

It is also being claimed that Apple will introduce a new Dock Connector to the new handset that is believed to have fewer pins, with sixteen being mentioned. This will be used on all future devices that include an expected update to the iPod Touch sometime this year, which will also feature an updated screen and CPU.

As always rumours like these have be taken with a pinch of salt but you would have thought this time round the iPhone will be revamped to take on the increasing competition from rivals such as Samsung. Do you like the sound of a 4-inch iPhone display? 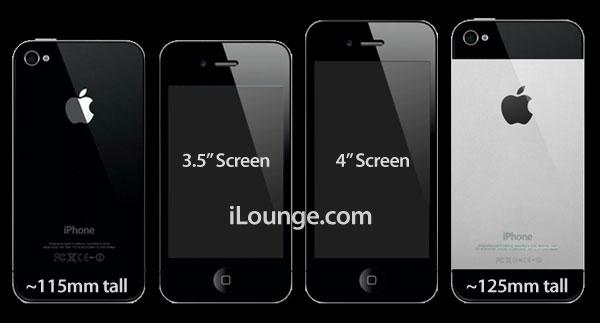