There are a huge selection of apps available for both the Android and iOS platforms, but certain apps seem to grab consumers attention more than others such as Temple Run, Instagram, and Angry Birds, but an application that has just topped Angry Birds is the Ugly Meter offering.

The application was originally started as a joke but it has now toppled Angry Birds from the top of the US App Store in sales, and according to The Vancouver Sun it sits at number two behind Angry Birds in Canada. One of the apps creators, Jo Overline, expects the app may achieve $1 million in sales this month.

Currently there are two versions of the application on the iOS platform that includes a $0.99 version that was created as a joke a couple of years ago, and a recently released $4.99 Pro version that promises to be more scientific that will scan a photo of a person against ratios that are known to aesthetically pleasing.

Overline said that the pro version will scan all the features of an individual’s face and “takes measurements of over 100 different points” before giving the image a score anywhere between 1 and 100. Meanwhile the cheaper version of the app is like a party game that can be controlled to say a person is ugly, unlike the Pro version that has no user control.

Ryan Allen and Jo Overline teamed up to create Dapper Gentlemen that are behind the application, and after creating the Pro version decided to pitch the app to the US radio personality Howard Stern, who had briefly mentioned the other version on his show when it was first released.

This saw sales of both versions of the app soaring after appearing on Stern’s show last month, and according to Overline the app works with any face as it is based on measurements and ratios, which means if these fall into line they will get a high ranking. Using the app Brad Pitt achieves a score of 91 out of 100; with his future wife Angelina Jolie getting a score of 86 after the app suggested her eyes were too close together, but it did say they were the perfect size for her head.

Some quarters did raise concerns about the application when it was first released warning of a potential for cyber bullying, but Overline’s five year old son dismissed these fears. Overline also said that the success of Ugly Meter will allow him and his partner to further expand their new game app business.

There is also a version on the Android platform that is priced at Â£0.61, but this gets some really bad reviews from users that have downloaded it with pages of users saying how the app crashes and force closes. This makes you wonder if this could just be another fake application put onto Google Play.

Have you used Ugly Meter? 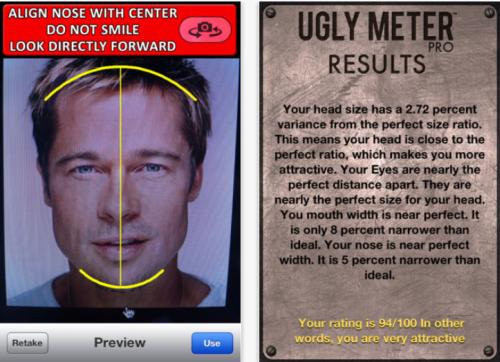