There’s some great news today for those of you interested in purchasing a new iPhone who don’t want to wait for the iPhone 5. It appears that both Target and RadioShack are currently slashing prices of the iPhone 4 and also the iPhone 4S, so you may want to take advantage of these deals now.

Although the Apple iPhone 5 is very much the focus of attention at the moment we still don’t know if it is more likely to appear in summer after WWDC in June or alternatively in the fall so we really have no idea how much longer the wait will be. With that in mind many of you will be pleased to hear about the price cuts being made for the iPhone 4 and also the iPhone 4S, which is still achieving massive sales at present.

As far as Target is concerned, 9to5Mac brings the news that some Target locations are offering deals on the iPhone 4 and 4S on all carriers. These prices are not available online and only at selected stores so you might want to check your local store in advance of a trip there. Both have been reduced by $50 with the 8GB iPhone 4 on sale at $49.99 on a two-year contract while the 16GB iPhone 4S is $149.99 on the usual two-year contract.

Now RadioShack has stepped forward to also reduce its iPhone 4 and 4S. iLounge tells us that $50 discounts are available on the iPhone 4 and 4S on all carriers. Apparently the discounts can also be used in conjunction with trade-in offers through the Trade & Save program. The promotion lasts through May and June but it’s not clear whether this is just in selected stores or across the chain so again it’s best to check your local store first.

We’d really like to hear from you if you’ve managed to pick up one of these iPhone 4 or 4S deals from RadioShack or Target? It would be useful if you could also tell us the locations of the stores that you notice are offering these deals by sending your comments. 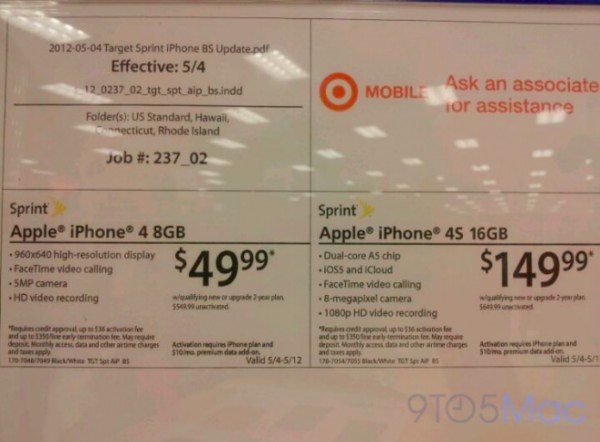