And that little Windows Phone ally is none other than Siri, as according to the guys over at Phone Arena, by way of WMPoweruser, when asked what’s the best cell phone ever, Siri responded with the Nokia Lumia 900 in cyan on AT&T (image below).

Siri doesn’t remain loyal to Apple can announce the iPhone as the best phone ever, but rather proclaims the rival Windows Phone handset as the top dog, although Siri’s reply might have been influenced by particular criteria, as apparently the Nokia Lumia 900 has achieved a high rating from customers because of the fresh design and value for money ratio, and according to the Phone Arena guys that is why Siri names the Lumia 900 at the best cell phone ever.

I’m quite sure that the iPhone faithful would disagree with Siri on this one, and would still defend the Apple smartphone no matter what; however it does give a little ribbing ammunition to rival platforms Windows Phone and Android to have a nice little wind up dig at their iPhone toting friend, which I’m sure they will take good advantage of. 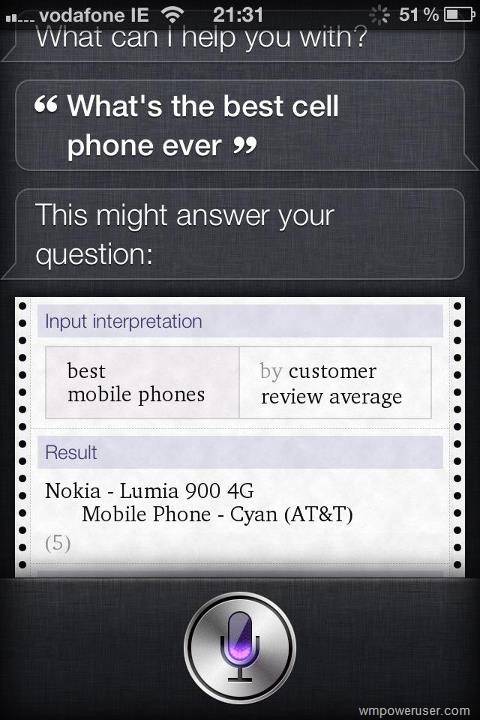