For the Windows Phone faithful out there it appears old Sammy has a new Windows Phone smartphone on the horizon that is said to be destine to play nice in Europe soon, as Samsung has now announced the Samsung Omnia M smartphone, a handset apparently aimed at those customers who prioritise entertainment features and social connectivity.

According to the guys over at Phone Arena, old Samsung has now gone all official with the Samsung Omnia M Windows Phone, a mid-range handset that sports a 4-inch Super AMOLED touch screen with 480 x 800 resolution, has 348MB RAM, and a 1GHz single core processor.

Word is that the Samsung Omnia M Windows Phone will initially roll out in Europe quite soon and will then be followed by a roll out to other regions, although which regions are unclear at the moment, and of course exact availability and price details have not been announced, but as soon as we hear we will of course pass it along. 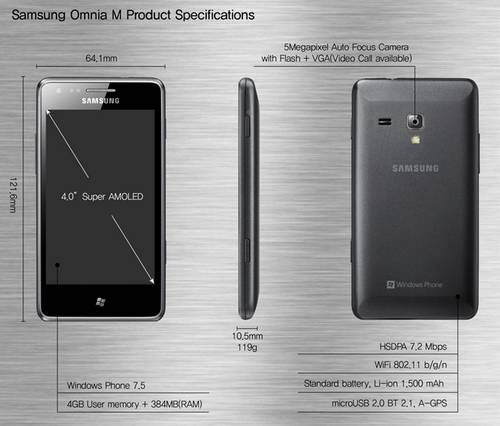