As most are aware the popular expectation is that Apple will deliver the new iPhone 5 later this year, and word has it the iPhone 5 will sport a new design, although whether that actually becomes a reality remains to be see, as Apple never lets on what a device is going to look like until they unveil the device in question.

However, there have been quite a few iPhone 5 designs surface of late, and we have a couple more iPhone 5 designs for your consideration today both coming our way courtesy of the guys over at Concept Phones.

First up (image above) is an iPhone 5 design based on the much rumoured edge-to-edge display design, and the guys say that this design feels like there is actually a piece of glass fitted between the two metal parts due to the lack of a side bezel, and when viewing the design from its profile shows a sort of mini display.

The edge-to-edge iPhone 5 concept was created by Sira Design, and apparently this next generation iOS smartphone has a 4-inch touch screen, 9megapixel iSight camera, iOS 6, an A6 processor, iCloud and a new Siri, and the actual concept design states the display is diagonal 4.0 +0.5, so could this iPhone 5 be a 4.5-inch or is that 0.5 the side screen?

Next we have an iPhone 5 concept design by [FUSE]Chicken (image below), an design that sports a 4-inch wide-screen display, and an elongated home button, whilst being 7mm in thickness and sports a 10 megapixel iSight rear facing camera and a 5 megapixel front facing camera.

This particular iPhone 5 concept includes quad speakers on the smartphone for stereo in both portrait and landscape, whilst the headphone jack has been positioned centrally.

Of course as with all concept phone designs they are not a reality, and will more than likely never make it to the mobile space, but if either of these two iPhone 5 concept designs where to be of the real deal iPhone 5, which design would you pick? 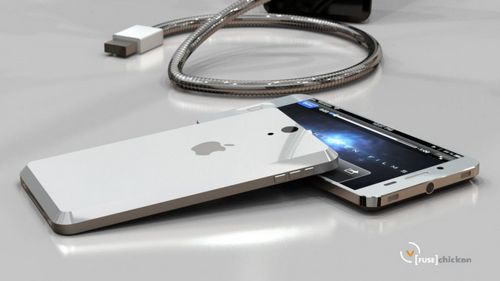 One thought on “The pick of Two New iPhone 5 designs”