For those over in the good old US of A that prefer the AT&T network as their carrier of choice, and are in the market for a slice of that fruity operating system known as Windows Phone Mango, you might just like to know that you can now purchase the Samsung Focus 2 on AT&T.

According to the guys over at Engadget, AT&T placed the Samsung Focus 2 officially up for sale yesterday the 20th of May and thus delivering another choice of Mango along with LTE rather than the Nokia Lumia 900.

For those that would like to own the Samsung Focus 2 on AT&T, unfortunately you don’t get a colour option with the Windows Phone handset, as the device is only available in glossy white; however the Samsung Focus 2 does command an attractive price point at just $49.99 when signing on for the usual two-year agreement of course.

So there you go, if you have been waiting for the Samsung Focus 2 to become available from AT&T you can now grab it, will any of our readers be picking up the Focus 2 from AT&T? 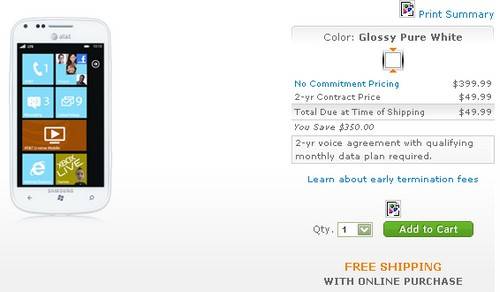