MetaWatch smartwatch gets data via iOS

Although we focus on smartphones and tablets at Phones Review we also like to bring readers information on accessories and gadgets and today we have some news about the MetaWatch. For those who haven’t heard of the Meta Watch it’s actually a smartwatch and two further improvements have just been made to its development platform.

The new model MetaWatch is aimed at developers and two improvements have just been announced. The first enhancement will enable users to wirelessly transfer data from iOS devices and the second improvement is adding a Bluetooth 4.0 radio to improve battery life. It’s powered by a Texas Instrument chip and is now available directly from Texas Instruments at a price tag of $199.

New of the enhanced Meta Watch comes to us from GigaOm who previously tested out a MetaWatch and found it to be of great use when paired with an Android smartphone. It enabled the user to receive email notifications, calls, text messages and more from their phone but the addition of iOS will be a huge step forward and give the MetaWatch even more appeal.

You may have heard of the Pebble Watch, a recent Kickstarter project that we brought you news of. The project broke all Kickstarter records for the amount of funds raised and much of this may have been achieved because of the inclusion of support for iOS as well as Android. It makes perfect sense then for MetaWatch to stretch to iOS support.

You can see much more on the Meta Watch or order one at the official website here where you’ll see that the dev kits are only compatible with the iPhone 4S and the new iPad/3 at the moment. The wearable development systems are also compatible with most Android devices running 2.3 or later. It comes in black or white color options with a leather strap and features water resistant stainless steel. The Meta Watch has a mirror polymer network LCD display with scratch resistant lens and hardened glass and actually looks pretty smart.

What are your thoughts on these latest improvements to the Meta Watch, especially the support for iOS devices? Let us know by sending your comments. 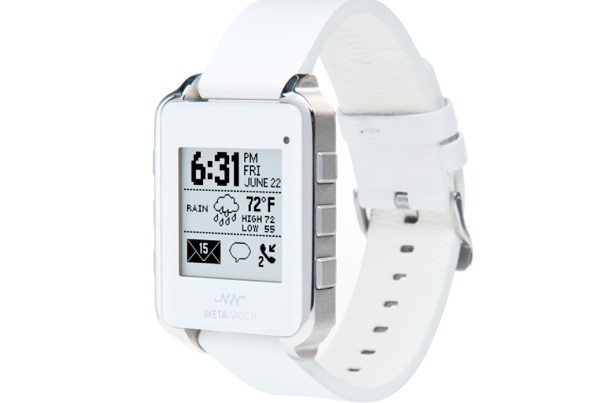