US iPhone carriers compared with verdict from app results

Readers with good memories may remember that last month we brought news of a new iOS app designed to help users find the fastest US iPhone carrier for their area, AT&T, Verizon or Sprint. We told how this useful app could have the major carriers concerned and the results from initial use are in so read on to find out how they perform.

What makes this app so unique is that it allows the user to find out which is the fastest network of the three specifically for the area where they live. Previously although different studies had attempted to ascertain this, the carriers concerned had managed to keep this kind of information pretty quiet until now. We imagine that being able to test the network speed of their carrier for the iPhone against the other two has already been useful to many people and there’s more help today with the results of data obtained by CNN Money using the CarrierCompare app.

CNN compared iPhone carriers across various locations and analyzed the information from Boston, Chicago, Los Angeles, New York, San Francisco and Washington. We learned of this endeavor from 9to5Mac who have now published the results. You may, or may not, be surprised to hear that AT&T took top position as the fastest carrier across these cities with the highest median speed on its 3G network. However this performance wasn’t consistent, especially when the network was at its busiest.

Next came Verizon, in second position except for New York with speeds of 72% of AT&T’s in most locations. However it was noted that Verizon offered a more consistent experience with speeds more steady across the day. Another plus for Verizon was the finding that it has easily the quickest network response time, excellent for loading Web pages.

Sprint was in lowly third place with the exception of New York where it was marginally faster than Verizon. However Sprint was found to offer the most consistent speeds of all with hardly any deviation over 25% above the median. The overall conclusion then from SwayMarkets who developed the app is that AT&T is the fastest network provider but when looking at speed and consistency combined then Verizon takes that top place.

If you want to take advantage of the app and want a reminder, it’s CarrierCompare – Find the best service for you, and it’s available from iTunes here. It’s a free app and compatible with iPhone 3GS, iPhone 4, iPhone 4S, iPod touch (3rd generation), iPod touch (4th generation) and iPad running on iOS 5.0 or later. Intriguing stuff then and we can’t begin to imagine what these carriers feel about their service being so transparent now. In fact the carriers responded to CNN about the CarrierCompare app results and you can see those responses here, basically the sort of reaction you would expect from all three.

What will be really interesting of course is to look forward to the iPhone 5 which is heavily-rumored to be 4G LTE-equipped. A whole new dimension may be added if each carrier’s LTE network speeds are taken into account. What are your thoughts on the results of US iPhone carrier network speeds from the CarrierCompare app? Does your own experience reflect these findings? Why not let us know by sending us your comments. 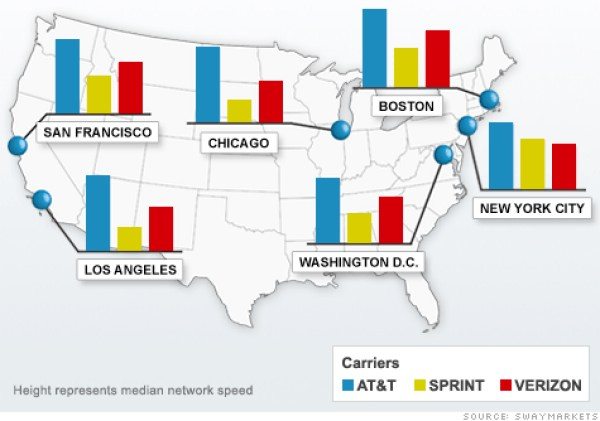