Curently Intel’s Medfield chipset has made its way into several smartphone as Intel push the Medfield to smartphone makers in a bid to rival the ARM chipset, but thus far the Intel Medfield hasn’t made its way into tablets; however it appears that that just might change in the not too distant future.

According to the guys over at Ubergizmo by way of Netbook News, apparently Sharp has unveiled a prototype education slate that has the Intel Medfield chipset and can run either Windows 8 or the Android Ice Cream Sandwich operating system.

Designed for the education market, the word is Sharp is gearing up for production of the Intel Medfield packing tablet, although currently there is no word on just when the slate would become available.

When it comes to specs for the education tablet, apparently the slate packs a 10.1-inch 1280 x 800 resolution touch screen, an 8 megapixel rear facing camera along with a VGA front facing camera, a 32GB SSD, RFID based alarm system, wireless charging, biometric sensor and pen input.

As mentioned previously, the tablet can run either Windows 8 or Android Ice Cream Sandwich, but as Windows 8 hasn’t been launched just yet one can assume the Windows 8 version wont be arriving very soon. As for what price tag the Sharp education tablet will hit the pocket for and just when we might see it surface, Sharp hasn’t divulged. 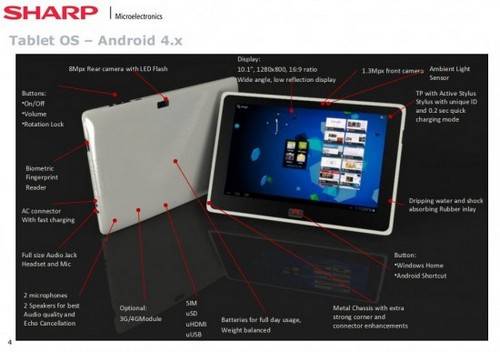 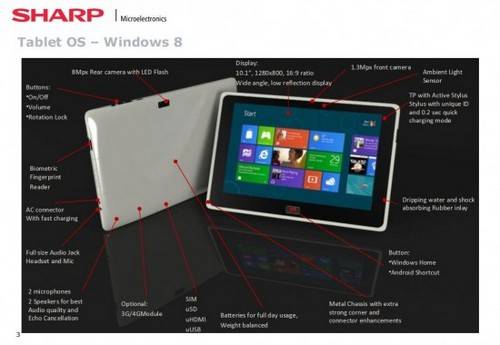