Currently the tablet PC market is dominated by the Apple iPad and devices using the Android platform, but this year that is all going to change with the launch of the Microsoft Windows 8 operating system, and today we have news of the Acer Iconia W510 and W700 Windows 8 tablets.

Acer has announced the new tablets at the ongoing Computex event and according to SlashGear both the Iconia branded devices will come with a cradle and/or a keyboard. First up the Acer Iconia W700 features an 11.6-inch Full HD 1920 x 1080 resolution display with eight hours of battery life promised, along with Dolby Home Theatre hardware built in.

There is a single USB 3.0 port on one side but the dock that comes with it has a further three USB 3.0 ports. It also features a micro HDMI socket along with a Thunderbolt port, power button, volume control, and a headphone jack. The device has its own screen lock switch along with a five megapixel camera on the back with its own microphone, and the unit is manufactured from aluminium but Acer has placed a material on the back to stop the tablet from slipping on smooth surfaces.

The W700 is not packaged with a keyboard but the 510 does feature one, but you can always make use of one of the USB ports or Bluetooth. Meanwhile the W510 looks similar to the W700 but it will be marketed entirely differently, and this will feature a 10.1-inch IPS display and will be bundled with a keyboard over a dock. The keyboard allows 295 degree rotations of the tablet and has a single USB 2.0 port located on the right hand side with the power jack on the left.

It also has a micro HDMI port, microUSB, SIM card, and microSD ports as well, and it is basically a slightly lower spec device compared to the W700, but still comes with an eight megapixel camera and attached to the keyboard it will provide eighteen hours of battery life. The company has yet to reveal pricing and availability for the two devices. 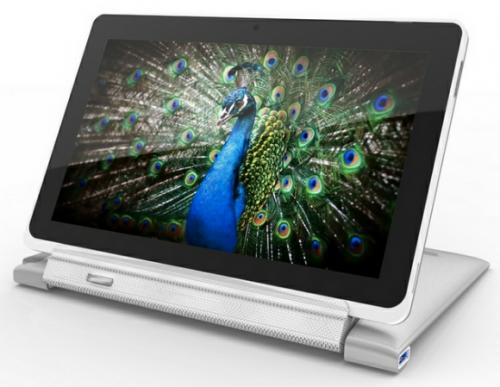