Obviously the closer we get to that day all the iOS faithful are looking forward to, the day Apple unveils the next iPhone, anything to do with the upcoming iOS smartphone is news, unconfirmed rumours obviously, but still news, and the latest of these is that the next iPhone, presumably the iPhone 5 will have a bigger screen.

According to the guys over at Apple Insider, they have got hold of a research note which claims that Mingchi Kuo, an analyst for KGI, who is known for having sources within Apple’s supply chain, expects Apple this year to deliver a taller iPhone sporting a 4-inch 16:9 aspect ratio screen.

Apparently Kuo wrote in a note that they expect the iPhone 5 to have a 4.8-inch in-cell IPS panel with a display resolution of 1136 x 640 and 500-nit brightness.

Kuo also noted that those specifications would be a valid compromise of the firm’s values of one handed operability, battery life, improved user experience and backwards compatibility with the iPhone , and further speculated that Apple has ruled out displays over 4.3-inch as resulting handsets would be difficult to operate with a single hand along with suggesting that there is an inflection point at 4.3-inches where bigger screens need visibly bigger battery capacity.

The analyst has also stated that he expects Apple to keep the battery capacity of the next generation iPhone at about 1400mAh which is similar to that of the currently iPhone 4S, and he believes that lengthening the iPhone 5 without making the handset wider would save on application redevelopment costs as legacy apps would be letterboxed, whilst the 16:9 would deliver more viewing space when typing in portrait, films would be displayed more naturally in landscape and a longer iPhone 5 would place the receiver closer to the mouth and speaker closer to the ear.

Of course this is all only one analysts speculation and as you know when it comes to Apple gear nothing gets confirmed until Apple is good and ready to do so, but it is looking more likely that the iPhone 5 will be a longer smartphone with a bigger display if the rumours turn out to be spot on. 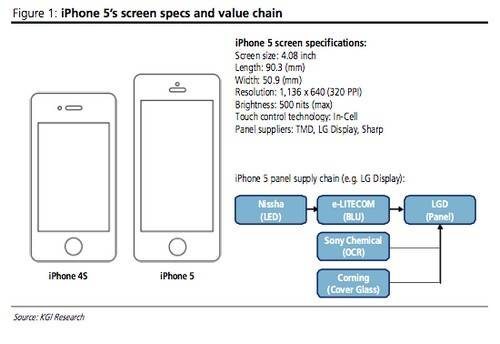