The Euro 2012 football tournament kicks off tomorrow, Friday June 8, and for those of you who want to keep a close track of all the events the Official UEFA EURO 2012 Football app is now available. It’s available for the iOS and Android platforms and will keep you informed with all you need to know about the 14th UEFA European Football Championship.

The tournament is taking place in Poland and Ukraine this time around and with the opening match of Poland vs. Greece taking place in less than 24 hours, now is a good time to be downloading the app and getting used to all that it has to offer. The iOS and Android apps are both free so simply click on the links to be taken straight to either the App Store or Google Play store.

First the Official UEFA Euro 2012 app from UEFA is available at iTunes here and is compatible with iPhone, iPad and iPod touch running iOS 4.2 or later. It’s a 17.1MB download and supports the following languages, English, French, German, Italian, Polish, Portuguese, Russian, Spanish and Ukrainian. The tournament runs from June 8 right through to July 1 and version 2.1 has just been released with sharing fixes and performance improvements.

Features of the app include all of the latest news, personalized alert set ups for your favourite team and match events, calendar, standings, scores, lineups, player profiles, a photo gallery and detailed statistics as well as the ability to share with friends on Facebook and Twitter. You can also see free video interviews with players and coaches and for those who don’t mind spending some cash you can purchase match highlights to view after midnight.

On to the Android app and the Official UEFA Euro 2012 app is available at Google Play here, compatible with devices running Android 2.0 or later. It offers much the same as the iOS app detailed above and has just been updated to version 2.0 with performance improvements, access to live commentaries during the games and locations of the Euro 2012 stadiums. You may also be interested in a previous Euro 2012 app we told you about, the Football Attack Euro 2012 app.

Roll on the opening game tomorrow then and with the help of these apps you should be fully prepared. Will you be following Euro 2012 and if so which team are you cheering on? Have you already tried out the Official UEFA Euro 2012 app and if so what did you think of it? 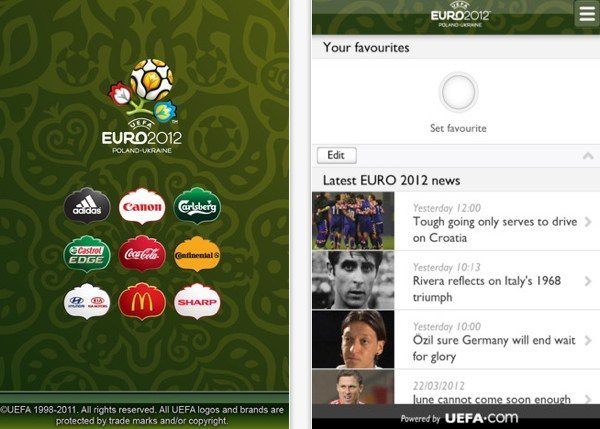