For iOS and Android the Facebook App Center has over 600 apps available that users may like to download to their mobile devices. If you have the iOS or Android Facebook app you can access the Center through the app. Alternatively you can access it on your browser here. You’ll see that some in the US can already use the App Center while it will come to everyone in the coming weeks. It couldn’t be easier to use. Simply select your app choice and you’ll be directed to either Google Play or the Apple App Store where you can then download and install.

As PC & Tech Authority points out though, you may want to delete any apps that you don’t want your friends to know you’ve used as the Facebook App Center tell about apps that you’ve downloaded as recommendations to your friends. However this could be handy if you’re looking for someone to play a particular game with. According to Facebook the new App Center only lists high-quality apps based on user feedback and apps are listed with a full description and also screenshots so you can get a good idea of what they offer.

A recent hands-on experience with the desktop version of App Center was reported by PC World. It tells how the Facebook App Center is a “funnel to access apps you’d like to use” rather than a direct replacement for Google Play or the App Store but that it does lack a basic search facility. The hands-on look details Categories, Requests, Individual App pages and Send to Mobile. Categories are divided into Entertainment, Facebook, Games, Lifestyle, Music, News, Photos & Videos, Sports, Travel & Local, and Utilities and the landing page is divided into three ways of viewing apps, all apps, only mobile apps or only web apps.

Meanwhile below the categories you’ll see a Requests link in the left column, which details all the offers and game requests your friends have sent you. This conveniently offers the user the ability to block particular apps if desired by simply hovering over them and then clicking on the ‘X’ that appears. The Individual App pages give all the details about a particular app along with a cover photo, below which there are access buttons to the app. Here you’ll also find important privacy info about the app such as whether it can post to Facebook for you, what profile details it would like to access and also about Timeline privacy settings. You’ll also find the information regarding which platforms the app is available on here (eg. Facebook.com, Android, iPhone or web).

Finally Send to Mobile means that the user simply has to click here and an alert will be sent to your platform of choice. Once you hit the alert and then use the device with that platform you’ll be taken straight to the relative link to download the game. All in all from what we’ve seen so far the Facebook App Center has a lot of promise and we can’t wait to try it out for ourselves.

What are your thoughts on the Facebook App Center? Are you one of the people who have already been able to access the Center? Do you think it will catch on? Let us know with your comments. 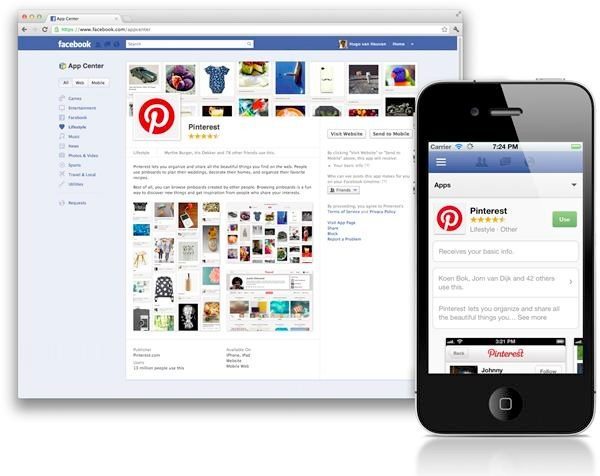 One thought on “Facebook App Center may be a winner”