New Temple Run: Brave now live for iOS but not yet Android – Updated

Here at Phones Review we like to bring our readers news on all the most popular and latest mobile apps. One of the most popular apps of recent times that we’ve written about is Temple Run and today we have news that many of you have been waiting for as Temple Run: Brave is now available for iOS users at the App Store but not quite yet for Android.

Regular readers may well remember that Temple Run on iOS was a phenomenal success and the ongoing saga that surrounded it when it took quite a while to reach the Android platform. As Temple Run was such a huge hit the new addition has a lot to live up to and Imangi Studios announced it would be available for both iOS and Android users on June 14 (today). So far the Android version doesn’t seem to have gone live but keep an eye out in the Google Play store. However the iOS version is now live in the App Store. We’ll be keeping our fingers crossed that there are no delays for the Android version and that it will appear today.

Temple Run has already achieved 50 million downloads across all platforms and it seems likely that Temple Run: Brave could smash that record. News of the app going live comes to us from The Next Web and for those of you who haven’t already heard, the new installment Temple Run: Brave is co-branded with Disney/Pixar and Brave is an upcoming animated movie. The news that the iOS version was now available was tweeted by Imangi Studio founder Keith Shepherd and it’s priced at $0.99 or Â£0.69 at iTunes here. Temple Run: Brave for iOS is optimized for iPhone and iPad running iOS 4.0 or later.

Some of the new features for Temple Run: Brave include the introduction of Archery, new environments in the wilds of Scotland to tie in with the Brave film and running from demon bears. The new star is Merida, the main character from the movie and from what we’ve seen so far Temple Run: Brave should keep original Temple Run players happy and attract a whole swathe of new users.

We think the App Store will be kept busy today from people downloading Temple Run: Brave so if you manage to get hold of it why not let us know what you think? If you’re an Android device owner and find it has now appeared in the Google Play store then we’d be pleased if you could let us and other readers know by sending your comments. 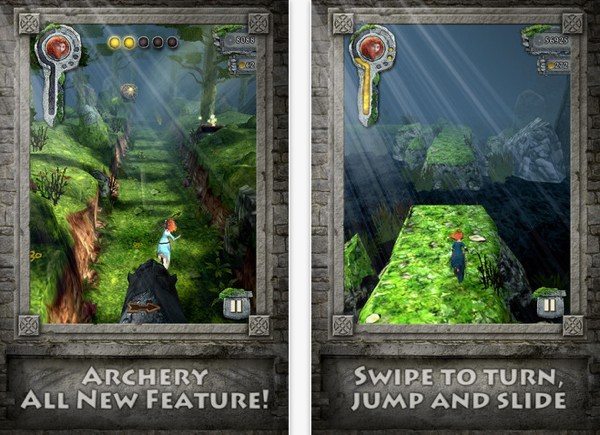 6 thoughts on “New Temple Run: Brave now live for iOS but not yet Android – Updated”