In recent times that has been a collection of applications that have really captured the public’s imagination and gained a huge following, and today we can tell you that the popular Draw Something app for Android and iOS has been updated with some new features.

This popular application for those that have never heard of it is basically a digital version of Charades, but users draw a picture for other people to guess. The application was recently given a Retina iPad update, and as App Advice is reporting the game has been updated again with some big changes to its appearance.

This latest version of the Draw Something app brings with it a major rework of both its gameplay and its shop structure. The Draw Something home screen now splits user’s games into two groups depending whose turn it is, whether it’s yours or your playing partner. There is also a relative timestamp displayed for each game.

Now game expiration is displayed for an inactive game that will notify users that a game is about to demise if it’s a week old. The actual game itself now has special words from more than thirty categories such as the likes of video games, insults, fashion, amongst others that are now available to draw.

Users need to spend 2 bombs to be able to choose a special word, but the good point of this is that each special word features a reward of five coins. While the shop has been overhauled so it displays all the bomb packs and colour bundles that can be purchased with the players coin collection. The game is now available in thirteen languages and is available on the App Store and Google Play in a free ad supported or paid for versions.

Are you a fan of Draw Something? 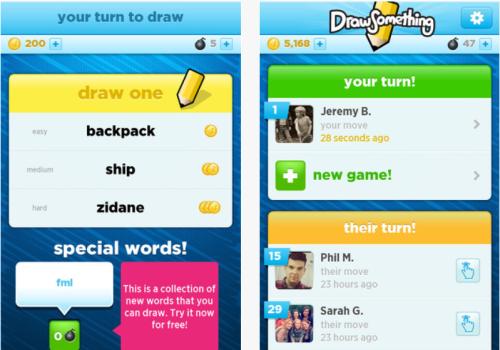 One thought on “Draw Something app for Android & iOS updated”