v1.5 Dropbox update for iOS brings it in line with Android

If you’re an iOS Dropbox user and maybe a bit miffed that the Android offering is marginally ahead of yours then we have good news for you today. The Dropbox iOS app has just been updated to version 1.5 bringing some of the things you may have felt you were missing out on, such as automatic uploads, so read on for more.

For those who don’t already know, Dropbox is a popular cloud storage option allowing users to store their photos, documents and videos and access them from any of their computers, smartphones, tablets or the Dropbox website. It appears that iOS users are in for a treat with the new version because as well as WiFi and cellular connection automatic uploads for photos and videos being added, users will find this new feature offers them an amount of up to 3GB of extra storage. This will be supplied in 500MB handouts as necessary.

Other new features include Gallery View for looking at all the photos or videos you’ve uploaded to Dropbox and also the ability to upload files of any size. You can also delete or move sets of files at once. News of Dropbox v. 1.5 for iOS came to us from Engadget and if you want to check it out you can find it at iTunes here. Dropbox for iOS is a free app 12.1MB download and is compatible for iPhone, iPod touch and iPad running iOS 4.0 or later.

If you want to see more about Dropbox you can head to the website here where a short video shows how it works and there are also links for Windows, Mac or Linux downloads. If you’re a Dropbox user are you eager to try out the updated Dropbox for iOS? If you’ve already checked it out perhaps you could let us know your thoughts on the improved iOS Dropbox by sending us your comments. 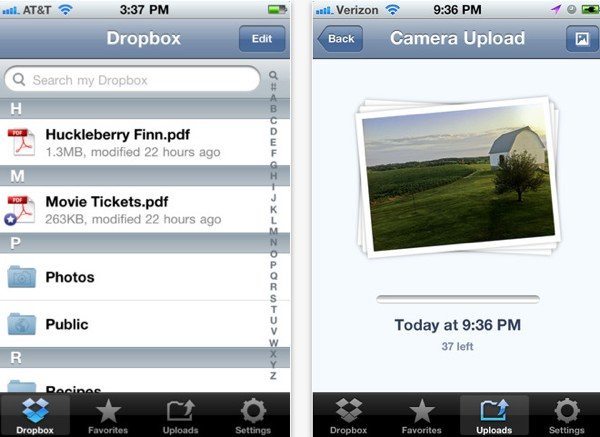 One thought on “v1.5 Dropbox update for iOS brings it in line with Android”