With today’s high end smartphone there is always a little issue with heat, high end smartphones tend to become somewhat on the hot side when using apps, playing games, or watching those HD videos; however, when it comes to Qualcomm’s Snapdragon S4 processor, Qualcomm has devices to prove that their latest processor is cooler than rival processors.

As such, Qualcomm have delivers a little proof that their Snapdragon S4 processor doesn’t heat up as much at other processors, and have produced video evidence using butter, yes in the video we have for your viewing consideration below the guys use melting butter to show that the Snapdragon S4 is the cooler processor.

In the footage which comes our way courtesy of the guys over at Phandroid, the Qualcomm guys place a Snapdragon S4 handset next to two competing devices and a thermal camera then shows the thermal footprint each smartphone leaves, a heat map so to speak, and this shows the S4 is more thermally efficient that its competitors.

The guys then take it one step further to give a little visual evidence how cooler the Snapdragon S4 is when compared to rival devices by placing a block of butter on each handset, which apparently melts at 35 degrees, and well as you will see in the footage below, the Snapdragon S4 fairs much better than it’s rivals. Heat of course over time affects a device’s performance.

So with all that said and done all you need do now is head on down and hit that play button to check out the video evidence…enjoy. 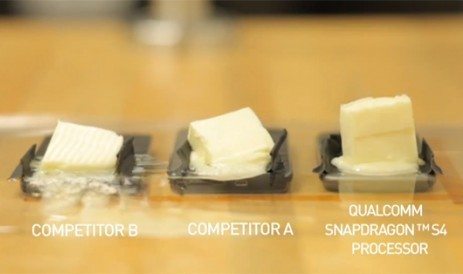