We know there are plenty of people waiting to get their hands on the Samsung Galaxy Note 10.1 tablet and recently there was a stir when leaked release details seemed to have come out, although they were subsequently pulled. However for those of you waiting we at least have a video for you to take a look at and in it you can clearly see a phone dialer along with Telcel wallpaper.

A few days ago we told how the Galaxy Note 10.1 had gone up for pre-orders on Amazon, first showing availability of between 3 and 5 weeks, changed later to show a release date of July 30. A price of $549.99 was also listed but before you take too much notice of this news (in case you missed it) we should point out that Samsung later issued a statement saying pre-orders were not yet available and the Amazon page was taking down. Of course that July 30 release date may be genuine but if so we’re obviously not meant to know that yet!

While we still don’t have a confirmed release date for the Galaxy Note 10.1 a new 5-minute video has come to light, as reported by GigaOm, showing a hands-on experience with this much-awaited device. The text shown in the video may be Spanish but even if you don’t speak the lingo the video still throws up some interesting teasers. Android Central points out the Telcel wallpaper for example so it now seems we know at least one network that will offer it. Another intriguing spot is that phone dialer.

We also mentioned the other day that the Amazon details that went up listed a 1.4GHz quad-core processor rather than the dual-core that was expected for the Galaxy Note 10.1. This would no doubt please a lot of potential customers although it has not been confirmed yet. Other specs and features include the 10.1-inch display, 1GB of RAM, S-pen stylus, 3.15-megapixel camera with autofocus and LED flash with 1080p video capture and 2-megapixel secondary camera. It all runs on Android 4.0 ICS.

If you want to see more of the Galaxy Note 10.1 check out the hands-on video below this story. It certainly looks as though its running nice and smoothly but it would be good to know a launch date for when we can all get our hands on it. What do you think of what you see on the video spot? Will you be purchasing the Galaxy Note 10.1? Let us know with your comments. 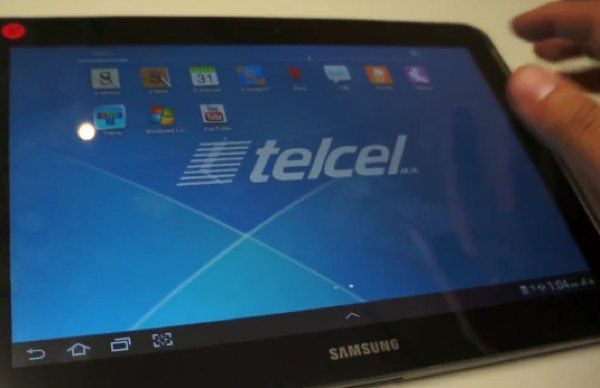