For as long as I can remember there have been rumours that Facebook is stepping into the smartphone arena with a Facebook phone, although the closest thing to a Facebook phone thus far has been the HTC Cha Cha and HTC Salsa, and recently there was rumour of a Facebook phone codenamed Buffy.

The Facebook phone Blue Experience concept phone is somewhat of a long handset 17.5cms long by 5.5cms wide and features a wedge design blue saturated aluminum casing, with that wedge design making the display easily viewable when placed on a flat surface, although that large size wouldn’t make the handset pocket friendly.

With this concept design the home button is replaced with a thumbs up ‘like’ button, whilst the speakers and the microphone have been moved to the rear of the handset, so basically if you wish to make a call you’d have to turn the handset around.

Apparently the Facebook phone Blue Experience also has a couple of dedicated buttons to launch Spotify and Instagram, and there is a button at the top that apparently serves as message notifications and delivers access to your messaging centre.

Again as I mentioned above this is a concept design for a Facebook phone so no doubt will never make it to the mobile space much like most concepts, but would you be interested in the Facebook phone if it incorporated this particular design? 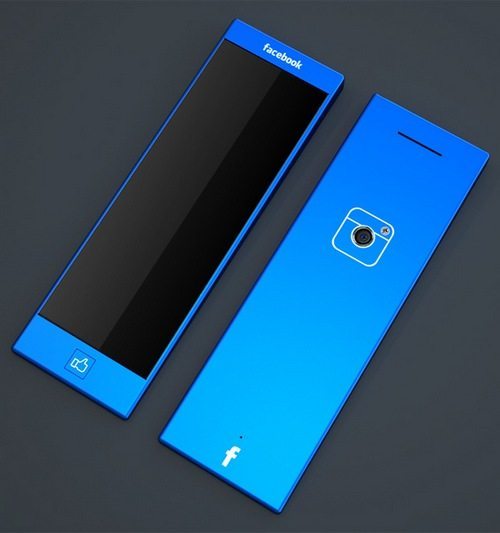