A couple of former Google guys wanted to create a tool that enables users to view and respond to text messages sent to an Android device regardless of what device there are using, and the product formally named Texty has been in beta testing for some time, and now has officially launched as MightyText for Android.

According to the guys over at Slash Gear by way of Tech Crunch, the MightyText Android application has been available as a Chrome extension that has garnered some 250,000 users who send in excess of 2 million messages daily, and basically the application allows any Android user to send and receive SMS texts from virtually any device just as they would with their Android smartphone.

The MightyText app allows the user to send and receive messages via their computer which is synced with their Android phone number, gain SMS notifications on their PC as soon as an SMS hits their handset, the ability to see who is calling you on your computer, and is likened to Apple’s iMessage.

Using the MightyText app means text messages can be sent to any user on any device , and also apparently MMS messages can also be sent, along with organising texts, calls and picture messages so you can search for them easier and store securely.

To use MightyText you are required to download and install the MightyText app on your computer, which can be downloaded for free from mightytext,net along with the mobile app onto your Android device, which is available for free by hitting up Google Play. 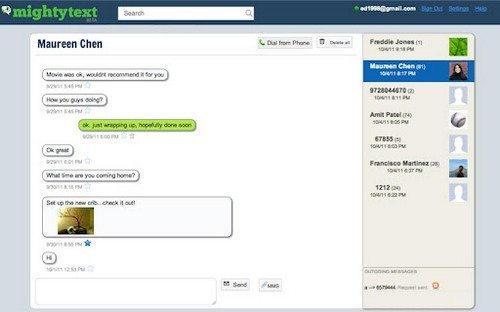