The Android platform is being treated to a number of worthy games being added to the Google Play store recently and today we have news of the popular Mystery Manor Facebook game leaping across to the Android platform.

The game centers around the Manor where a mysterious event has taken place that has turned the life’s of its inhabitants upside down, as there much loved master Mister X has completely disappeared with no clues except a strange message. It is now down to users to try a break the dark secret of the Mystery Manor by challenging their selves with some hidden objects action.

This game is a mystery style hidden objects task where a mystic mansion is occupied by strange but nice people, but there are also scary ghosts and spooky monsters with players having to solve logic puzzles. Players need to find hidden objects to unlock new rooms to explore and complete quests, and Mystery Manor is a never ending game.

There will be new characters, quests, and rooms added to Mystery Manor on a regular basis, and unlike similar games you will never finish the game. Despite the excellent graphics and engaging gameplay, Mystery Manor is completely free to enjoy.

Some of the features of the game include a captivating story line, huge range of objects to search and puzzles to solve, beautiful hand drawn graphics, help your friends and ask for their help in return, and search for the objects in different modes: words, silhouettes, phenomena, and Zodiac modes.

The great thing about the game it is completely free to play and will be continually updated by the developers, and users that have already played it on Android have been giving it the thumbs up so far. Below we have added a demo video of the game for you to watch, and head over to Google Play to download. 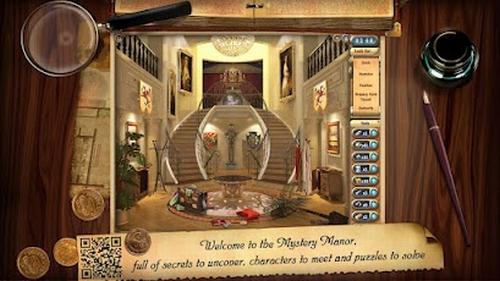