The Google I/O 2012 app is for Android devices running Android 2.2 and above and have been optimised for both smartphones and tablets, and enables users to view the event’s agenda along with the ability to edit their personal schedule, view detailed sessions, speaker info, speaker biographies, Google+ profiles, photos, and code lab.

With the conference companions app for Android the user can also +1 sessions, take part in #io2012 conversations on Google+, use the conference map as a guide, see info on companies in the Google Sandbox, keep up with I/O team announcements, play back I/O Live session video streams on Android 3.0+ devices, see your schedule on Android 3.0+ devices home screen via an app widget.

The Google I/O 2012 app also allows auto-sync of sessions in the users schedule to their Android Ice Cream Sandwich device calender, and beam sessions daily via your Android ICS NFC enabled device to another via Android Beam.

Obviously the application isn’t of much use to your everyday usual Android user, but if you happen to be attending Google I/O this year then you can download the Google I/O 2012 app for free by hitting up Google Play. 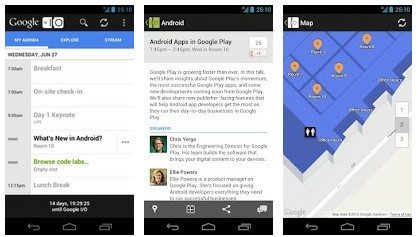 One thought on “Google I/O 2012 for Android now available”