For the iOS faithful lover of tennis, the Wimbledon Championships 2012 kick off in a few days time on the 25th of the month, and if you like to watch Wimbledon on your iOS smartphone, iPod Touch or iPad, you’ll probably already have last years Wimbledon iOS app so you could keep up with all things to do with Wimbledon.

However if you are a tennis lover that owns an iPhone, iPod Touch or Apple iPad you just might like to known that the Wimbledon app for iOS devices has now been given an update for this year’s Wimbledon Championships.

Apparently the 2012 iOS app carries over all the features from the previous version of the Wimbledon app, so includes such things as live scores, schedule of play, news, draws, results, player profiles, along with on-demand video previews, features highlights, golden moments photos, and interviews.

The Wimbledon app for the iPhone, iPod Touch and Apple iPad also offers Live @ Wimbledon Radio with three channels that give daily coverage of the tennis championships whilst tow of the channels are dedicated to the action on the centre court.

The Wimbledon iOS app version 4.0 has also been redesigned and has updated features specifically for the Wimbledon Championships 2012. So with all that said and done if you with to take advantage of the Wimbledon app you can download it for free by hitting up iTunes. 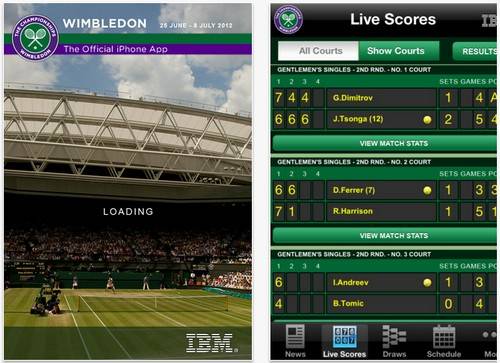