As usual release dates for many Android smartphones can slip even if they have been announced by the carrier or manufacturer, and a device that has many people waiting is the HTC Droid Incredible 4G LTE, but today we can tell you about a Verizon document that hints at the handsets release date.

A few days ago we brought you the news that the Droid Incredible 4G LTE was being tipped for a release early next month, and now some more evidence has come to light courtesy of the guys over at Droid Life. The site has been provided with an Equipment Guide Page for the HTC Droid Incredible 4G LTE, and the release date is again given as the 5th of July.

The handset was originally announced at the CTIA event last May and the release was tipped for June 21st even though nothing official has come out of Verizon or HTC about a date. The document shows the pricing for the handset set at $199 with a new two year contract, but hopefully there will be a $50 mail-in rebate that will drop the price down to a more respectable $149.

If this happens the handset will appeal to those that want a decent smartphone but do not want to pay out the kind of money the Samsung’s Galaxy S3 costs, and while it doesn’t quite have the specifications to compete with Samsung flagship device, a cheaper price will go down well with potential owners.

To recap the HTC Droid Incredible 4G LTE features a 4-inch Super LCD display powered by a dual core processor clocked at 1.2GHz. It also has an eight megapixel camera on the rear while around the front is a 1.3 megapixel unit. There is 1GB of RAM and 8GB of built in storage that is expandable via the microSD port, and the handset will come running with the elusive Android Ice Cream Sandwich operating system.

Will you be looking to pick up the HTC Droid Incredible 4G LTE? 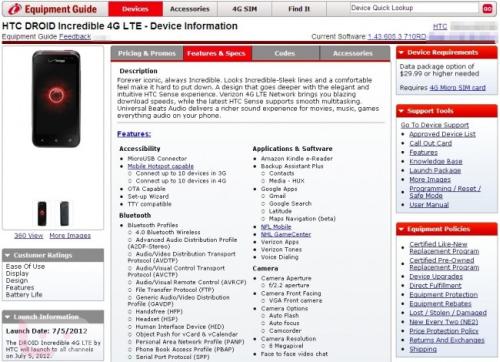